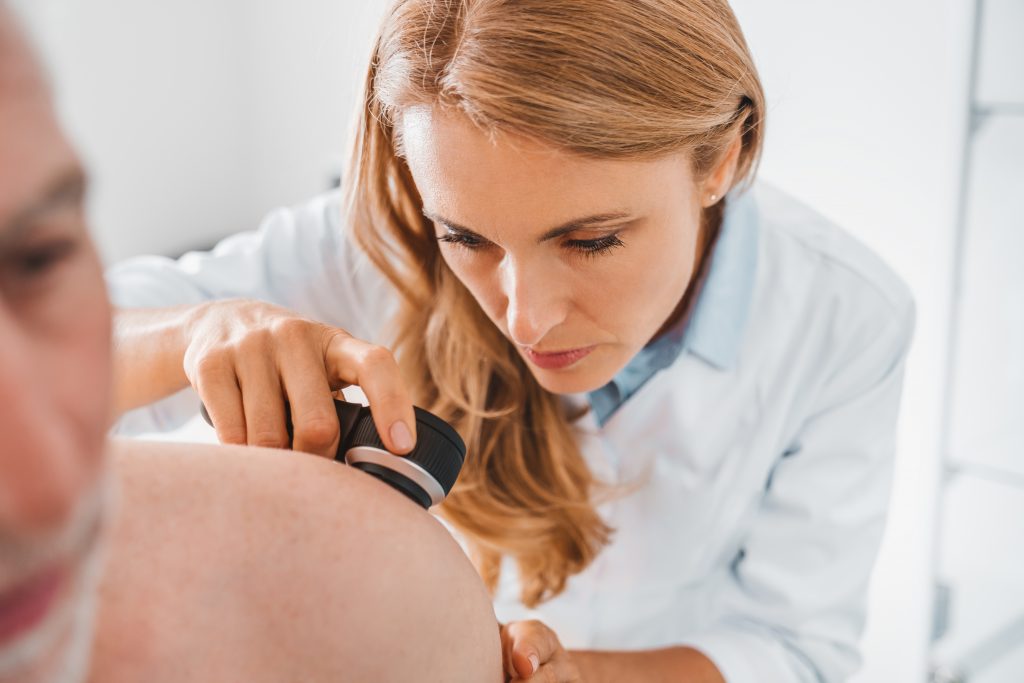 Studies have shown that skin cancer is a very common cancer (with a continuing rise in incidence worldwide, especially among the white population) that can be cured if detected early and treated immediately.

The treatment of skin cancer depends on the size and location of the cancer, the type of disease, and last but not least the patient’s age and health.

Multiple risk factors are involved in its development, but the most important factor is exposure to ultraviolet (UV) radiation, especially UVB radiation.

Genetic changes occur after frequent sun exposure, leading over time to malignant transformation of skin pigment cells. People who expose themselves to the sun frequently throughout their lives have an extremely high risk of developing skin cancer of the face and neck, and childhood sunburn increases the risk of cancer twofold.

Along with excessive sun exposure, sunbed UV exposure has the same potential effect on the skin.

Other causes of skin cancer include:

Genetics plays an important role, so in this case an individual with a first-degree relative with skin cancer or who has had skin cancer in the past, the risk of developing another skin cancer increases significantly.

Basal cell carcinoma is the most common form of skin cancer, but the least dangerous, and arise from abnormal, uncontrolled growth of basal cells.

It usually presents as a skin-coloured lump with a shiny, pearly edge, as a non-healing sore, or as a lump with a crust on the surface that grows slowly over time. If left untreated, it can ulcerate and invade deeper tissues.

Due to the fact that BCCs grow slowly, when treated early, most are currable and cause minimal damage. The best treatment for basal cell carcinoma is surgery.

Squamous cell carcinoma. This type of cancer usually occurs on sun-exposed surfaces and often resembles a scaly patch, a firm bump or an ulcer that heals and then reopens. This is the second most common type and can grow deep into the skin if not caught early, causing disfigurement.

Melanoma is a type of skin cancer that develops when melanocytes (cells that give skin its natural colour or tan) start to multiply uncontrollably. Although melanoma is much less common than other skin cancers, it is the most aggressive form. If detected early and in the early stages, melanoma can be treated and cured, but if not, it can spread to other parts of the body. Once it spreads, it is very difficult to treat and can become fatal.

Each form of skin cancer has specific signs and we should look for any changes in the appearance of the skin or moles. Many times we tend to ignore what doesn’t hurt, but skin cancer can be painless and dangerous at the same time.

If you have any cause for concern, contact your dermatologist as soon as possible.